A lost miracle? Tolerating much happening and expecting less to little, makes life easier to live…

The Institute for Relational Buddhism has a long history of academic work in collaborative practice. Most notably is the predecessor the Transcultural Society for Clinical Meditation, which was affiliated to the Society for Constructivism in the Human Sciences. Below you will find work done under the TSCM flag, which shows our dedication to the advancement of sentient beings through meditational and psychological buddhist practice and study.

This cordially invites you to browse our pages. Transcultural Clinical Meditation studies the alleviation of existential neurosis & mental growth beyond cultural confines from a wisdom traditions’ perspective and a New Buddhist Psychology. We advance a scientific discipline complementary to psychotherapy & promote a conventions, curriculum in CM Studies, seminars, lectures & workshops. TSCM is affiliated to the Society for Constructivism in the Human Sciences. Yours sincerely,

Mission & Vision (2004) This Vision & Mission Statement is about Transcultural Society for Clinical Meditation, founded by Yutaka Haruki, Ph.D., Professor of Psychology at the School of Human Sciences, Waseda University, Japan, and Convener of The Transnational Network for the Study of Physical, Psychological & Spiritual Wellbeing (TNSPPSW) conferences, sponsored by the Ibuka Foundation*, Japan. *Ibuka Masaru is the founding president of SONY.

How and when will we reach our goal? Our resonance with Constructive Psychology inspired us to think that the TSCM as a small group might evolve to become part of the larger Society for Constructivism in the Human Sciences (SCHS) and thus of mainstream psychology (our ultimate striving). However, to honor the tradition we have established in our own right, we will continue the work of the original Network by establishing TSCM and continuing to attract our own membership. TSCM and SCHS will go forward jointly organizing congresses and projects. This confluence is a first step. TSCM is on the lookout for more confluences and has found partners to build on the future in the University of Flores, Buenos Aires, Argentina, and BERN (BioEnerQi Research Network) that is part of the Virtual Enterprises Association, London, UK, and the Virtual Technology Center, Vienna, Austria. We will proceed guided by an adage found in the 27th verse of the Tao Teh Ching:

A good traveler has no fixed plans
and is not intent upon arriving.
A good artist lets his intuition
lead him wherever it wants.
A good scientist has freed himself of concepts
and keeps his mind open to what is. 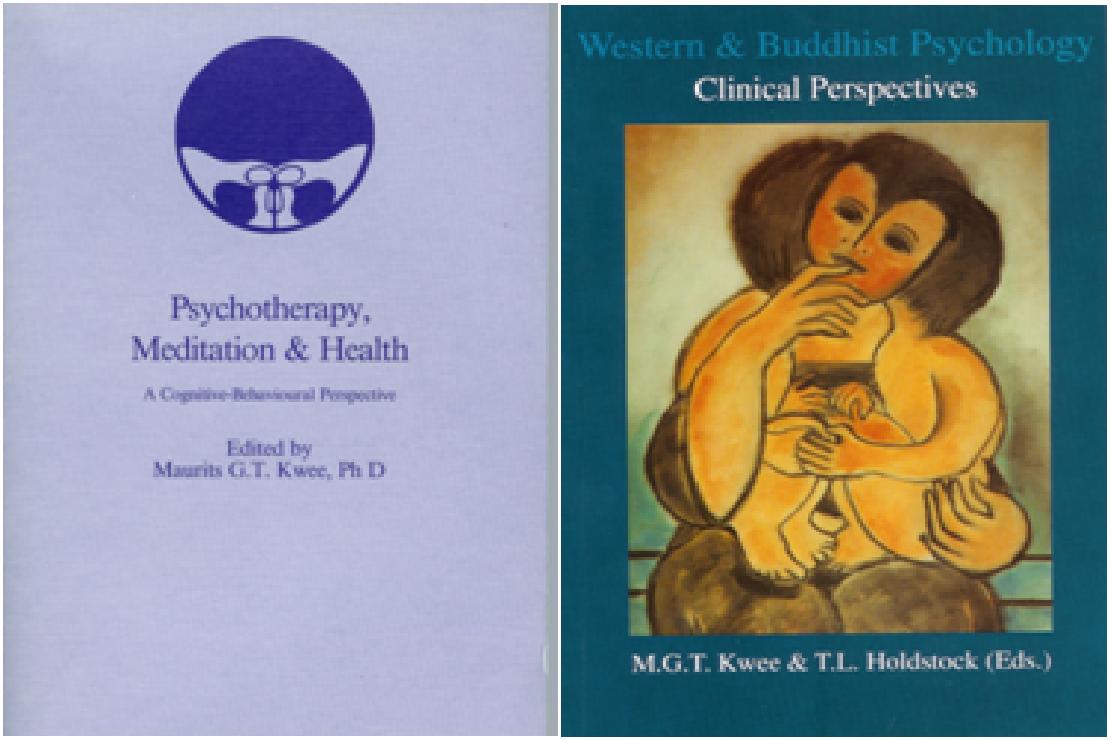 Book and special issues of journals by the Transcultural Society Of Clinical Meditation and the Transnational Network for the Study of Physical, Psychological and Social Well-being. There are fifteen as listed below.

Tian P.S. Oei & Julie Hodges (The University of Queensland, Brisbane, Australia) – Can a knife and fork be used to eat fried rice? – The compatibility of Cognitive-Behaviour Therapy and Chinese culture

Michael Drummond (University of Utrecht, the Netherlands) – The observation of bodily feelings in Early Buddhism and in experiential psychotherapy

Psychology is known as a discipline arising from Western experimental method, but there is perhaps no society that does not have a psychology, a way of understanding and training the person, in accordance with particular social values and concepts. Some of these ‘other psychologies’ are known as the Wisdom traditions, which include Eastern and Christian meditation practices, but also the age-old knowledge of the soul of the American Indian and Australian Aboriginal peoples. This collection of articles arose from a conference of the Transnational Network for the Study of Physical, Psychological and Spiritual Wellbeing, held at Wollongong University, Australia, in 2002, where scholars from various traditions met to discuss the significance of non-Western psychological knowledge and to challenge the prevailing direction of Western academic psychology. Some articles are theoretical in nature, others are based on clinical experiments. Themes range from concepts in Buddhist psychology to the effect of meditation on patients with chronic disorders.

Constructivism in the Human Sciences, 2003, Vol. 8, No.2. (275 pp) ‘A TRIBUTE TO YUTAKA HARUKI’ (Special Issue on Clinical Meditation) (Order by subscribing to the journal www.constructivism123.com or email mauritskwee@gmail.com)

The formative history of The Network and unfinished business – Mark Blows

A Western psychologist’s inquiry into the nature of right effort – C. Peter Bankart

Words and wisdom, being and boundaries – Michael J. Mahoney

Obstacles to insight: Some reflections on an aspect of Buddhist psychology – Padmal De Silva

NeoZEN: A “structing” psychology into non-self and beyond – Maurits G. T. Kwee

Part I: Ways of Personal Development in Daoism and Chan Buddhism

2.5. Daoism: Its Relevance for Managerial Functioning – A Summary

3.5. Chan Buddhism : Its Relevance for Managerial Functioning – A Summary

3.6. Zen Buddhism: Its Relevance for Managerial Functioning – A Summary

2.   The Manager within the Organization

3.   The Practice of Mindfulness

Part IV:  Sensory Awareness as a Training Method for Mindfulness: An Empirical Study

3.      Sensory Awareness as Practice: a Training Seminar for Managers

4.      The Effects of Sensory Awareness Seminars

5.   Sensory Awareness as a Training Method for Mindfulness ? A Summary

PART I – Qigong, Meditation, and Hypnosis

Ch 3  The Concept of Energy in Yoga?Vedanta – Saroja Srinivasan (Aus)

Ch15 Qigong and its Implication for Hypnosis – Gosaku Naruse (J)

Ch16 Meditation and Sexuality: A New Interpretation of Qigong and its Present-Day Significance – Yuasa Yasuo (J)

Ch21 Psychotherapy and ‘Do’ in Japanese Culture: Self-Cultivation Through Tackling a Set Task – Yosuke Sakairi (J)

M.M. DelMonte, & Y. Haruki (Eds.).(1998), The Embodiment of Mind: Eastern and Western Perspectives. Delft, Holland: Eburon Publishers (169 pp). Combined Proceedings, the 4th Conference ‘Body over Mind or Mind over Body: Does it Matter?’, August 12-15, 1996, Chateauguay, Canada & of the Symposium ‘ Does the Concept of Embodiment Offers Something New in Psychology?’, August 20, 1996, at the XXVI International Congress of Psychology, Montreal, Canada. (Order ISBN 9051666381 by email mauritskwee@gmail.com)

Part I: Body over mind or mind over body: Does it matter? – M. DelMonte

Ch 1  What kind of discipline is the mind/body problem? – Y. Haruki (J)

Ch 3  Does it matter if the meditator doen’t mind? On consciousness and awareness of the BASICI.D. – M. Kwee (NL)

Ch 7  How to use Taoist meditation to accelerate the healing process – N. Tremblay (Canada)

Ch10 Study of the psychology and the behavioural science of Qigong – W. Wang (China)

Ch12 The embodied mind, the talking cure and the silence of meditation – M. DelMonte (Eire)

Part II: Does the concept of embodiment offer something new in psychology? – Y.Haruki & J. Kabat-Zinn

Part I.   A Western psychologist in dis-ease

Ch 1 Dis-ease in psychology: The basis for a new beginning? ? Len Holdstock

Ch 9 Towards a conjunctive psychology: Happiness and levels of being – William Mikulas

Chapter 2        Meditation and the view of nature in East Asia: The human being as a small heaven and earth – Y. Yuasa (J)

Chapter 11      Travelling in the footsteps of Hotei: A spiritual and scientific journey – M.G.T. Kwee (NL)

Chapter 12      Mindfulness meditation: What it is, what it isn’t, and its role in health care and medicine – J. Kabat-Zinn (USA)

Chapter 13      Application of the meditative method in psychotherapy with an emphasis on Transcendental Meditation and Autogenic Training – Y. Sakairi (J)

Chapter 14      A technique of meditation based on Yoga philosophy and cognitive-behavioural theory – J. Dua (Aus)

Current State of Studies and Application of Eastern Body-Mind Practices in Europe – A. Saito

The Current State of Eastern Medicine in Ireland – M. DelMonte

The Current State of Eastern Medicine in China – J. Wang

3.     Meditation and personal identity – Laurence Freeman (B) Psychology of meditation

Practices to open the heart
10   Lectio Divina – Ria Weyens (B)

16   Should St. George have killed the dragon? The Tantric approach: The challenge of entering a spiritual journey as distinct from a useful health treatment – Mark Blows (Aus)

17   The view of Raja Yoga: Toward the whole person (world change through self-change) – Didi Sudesh (UK)

(This monograph comprises papers presented at the symposium ‘Eastern Techniques for Mental Health around the World’ held at Komazawa University in Tokyo, July 21, 1990 – when The Transnational Network was formed at the invitation of Yutaka Haruki – and at the symposium ‘Eastern and Western Approaches to Mental and Physical Health’ during the the 22nd International Congress of Applied Psychology in Kyoto, July 21, 1990). (Order ISBN 4761004940 by email: mauritskwee@gmail.com (Dept. of Psychology, School of Literature, Waseda University, 1-24-1 Toyama, Shinjuku-ku, Tokyo 162, Japan)

Part I: Eastern techniques for mental and physical health around the world.

Yuji Sasaki (J): Eastern techniques concerning the health of the mind and the body.

(This book had its origins in 1988 when a group of psychologists held a symposium at the 24th International Congress of Psychology in Sydney and marked the preparation of The Transnational Network’s conferences). (Order ISBN 0867861398 by email mjblows@tig.com.au)

Chapter 1  Relaxation and meditation: The relationship between them and historical context ?

Chapter 4  The relevance of meditation to clinical practice: A mainly Kellian perspective ?

Chapter 8  Effects of Transcendental Meditation for reducing anxiety of Japanese

(This conference might be considered as a precursor of the Transnational Network’s conferences.) (Order ISBN 0856921890 by email mauritskwee@gmail.com)

Section II: Self-Control and Control by a ‘Benevolent Other’

4        Is God a Confounding Variable in Meditation Research? Through an Hourglass Lightly – Deane Shapiro, Jr. (USA)

7        Meditation and Beyond: Buddhism and Psychotherapy – Padmal DeSilva (UK)